SHINee Maknae of all Artists 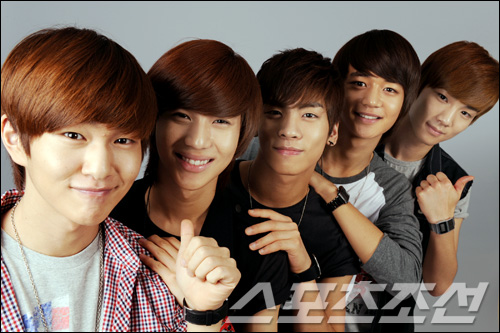 Through “Noona, You’re So Pretty”, “Love Like Oxygen”, and “AMIGO” last year, they were able to successfully secure the love of noonas. Most of the members of the group are still high school students, and this makes them seem more like cute sons rather than oppas (like older boyfriend material). Noonas and ahjumma fans give endless praise to SHINee. During SHINee‘s performances, you can easily hear things like, “If you’re too tired, don’t make money/work anymore! Noona will give you money!”.

But SHINee must also change with time. Currently promoting their second mini-album “ROMEO”, their love songs are not longer aimed at just one group, and even gained a more mature feeling. The title track is the currently popular hit song “Juliette”. By listening to different music and watching “Romeo and Juliet”, Jonghyun was able to pen the lyrics to the song. Compared to the urban R&B style of “Noona, You’re So Pretty”, this song is a huge change.

This year is considered an especially important year for SHINee. While trying to continue to develop and grow as artists down the road, Onew, Jonghyun, Minho, and Key also need to go to college. Having to balance both school work and singer activities, this will be an intense year for them. Maknae Taemin also has to take time out in order to film his sitcom, “Tae Hee, Hye Kyo, Ji Hyun”.