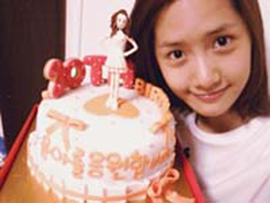 So Nyeo Shi Dae YoonA had her 19th birthday on 30th May.

And to thank her fans for her birthday, she had revealed the ‘fresh face authentication photo’.

YoonA posted on So Nyeo Shi Dae’s homepage on 1st June a post titled ‘This is YoonA“.

It is a shame that I don’t get many chances to meet fans because of my drama filming lately. 30th May was my birthday. I’ve seen many birthday wishes on the internet and I’ve received many letters from fans, and also presents. Thank you all very much for that.”

We celebrated my birthday yesterday at dawn, and I’ve received many well wishes from everyone, I feel so blessed. It’s so amazing that many people have known my birthday after debut.

It is a shame that I can’t join the So Nyeo Shi Dae members sometimes to show everyone the 9-member strong group. I’m currently on a recharge after the drama has ended. And I look forward to seeing everyone again.”

With our ‘Gee’ promotions this time, we have received much love from our fans and we are really thankful. The strength of fans are really big.

We will work harder on our album thinking of all the love and support given to us. The photo.. it’s embarrassing but it’s really really pretty ha ha ha YoonA’s fresh face. Thank you♡

One response to “Yoona’s Birthday Message to Fans”